Sonatas, Suites and Concertos of the Loeillet Family, Etcetera KTC 1434 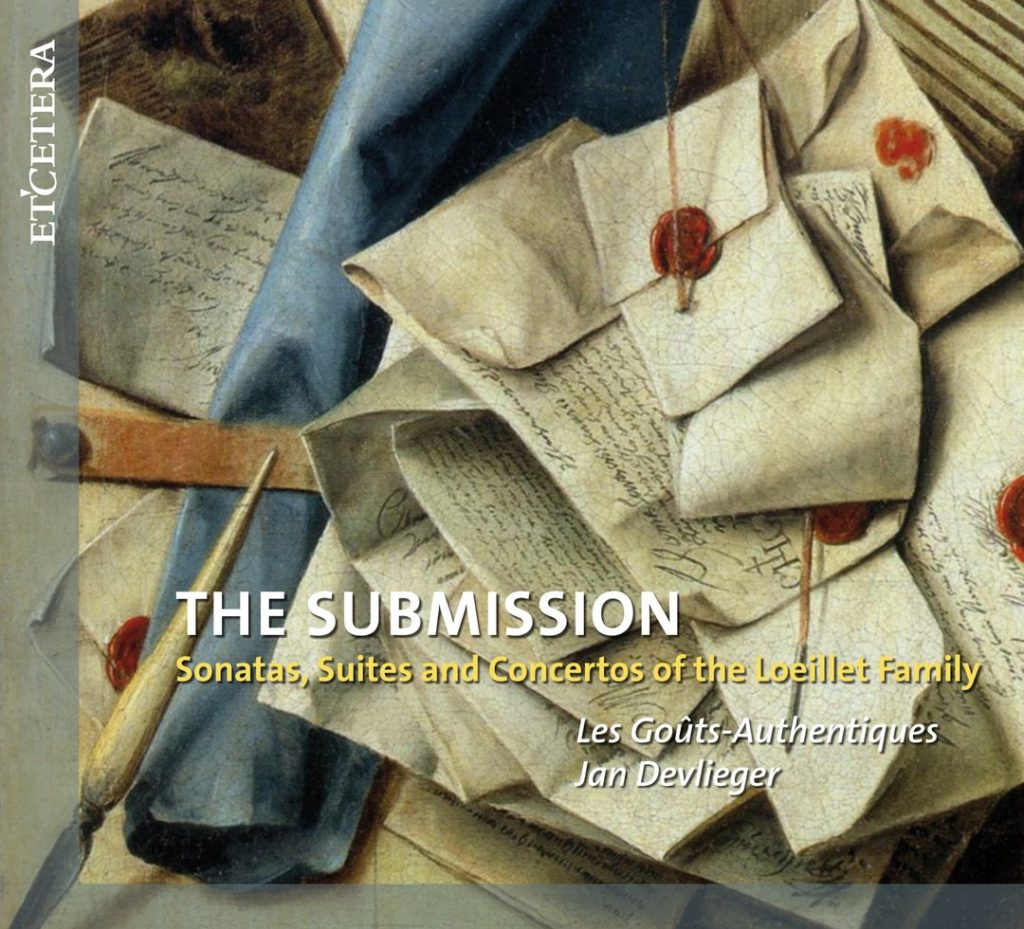 [show_more more=MORE… less=HIDE] The disc’s title sounds rather erotic, but ‘The Submission’ is a dance by the English dancing master Kellom Tomlinson. The disc’s subtitle is, by contrast, succinct and precise: Sonatas, Suites and Concertos of the Loeillet Family. This Ghent family made its way to London where it flourished, though it involves an act of will, and a certain amount of alcohol, to distinguish John (Jean Baptiste) Loeillet (of London, but born in Ghent in 1680) from his father Jean Baptiste François Loeillet (of Ghent, not London) and Jacques (Jacob) Loeillet -who was the brother of John (Jean Baptiste). By which point one wishes for nicknames.   If only this was the end of it. The flute and oboe concertos in this disc have been attributed by some musicologists not to the Loeillet clan – Jacques, Jean Baptiste or John and their various bracketed permutations – but to one Robert Woodcock (1690-1728) under whose name some of the movements were certainly published in around 1727. It would be spoiling the fun to reveal the ins and outs of these attributions, misattributions and indeed non attributions, so Jan Devlieger’s interesting notes are the place to start.   Whoever wrote what, the music is both entertaining and engagingly performed. Jacques’s Sonata in B minor is for two voice flutes, two transverse flutes and basso continuo and its discourse is chatty with the good recording ensuring that the continuo is well balanced throughout. Jean Baptiste – the father, remember, of John (Jean Baptiste) – contributes a Sonata in A minor for just two recorders which reaches a height of expression in the lovely slow movement where the instruments coil suggestively around each other in a decidedly affectionate sort of way.   The works of the father are followed by those by the son, John. His Sonata in G minor for recorder, oboe and basso continuo is one of the best things here, with melodic lines held back or cannily distributed for maximum effect. The Adagio is especially lovely. His so-called Suite III in C minor is for harpsichord. The dance movements are lively and engaging, and the music sounds to me strongly influenced by Purcell and Blow’s keyboard writing.   Those Concertos – whether by Jacques or Woodcock – are spry and springy, and require quick deft breathing. The gracefulness and graciousness of the opening of the E flat major is an especially nice moment but vibrancy is a feature, once again, both of music and performance. The Submission appears in the dance tunes by Tomlinson based on John Loeillet’s music. These very brief catchy dances attest to the splendid popularity of the dancing master. Tomlinson was up and coming, and in later years was to write a book called The Art of Dancing (fair enough – no ambiguity there). Finally, Devlieger delivers himself of a reflection on a tune by Loeillet – just under two minutes of quiet melancholy for string quartet.   Indeed Devlieger, treble recordist, voice flautist, harpsichordist, arranger and composer is a modern-day Loeillet, though which one perhaps only he can tell. His multi-faceted band plays with splendid authority and sonority, full of colour and command, passion and precision. Fine recording, too, and engaging notes.
[/show_more]

[show_more more=MORE… less=HIDE] This disc presents a collection of music by the Walloon Loeillet family, which came from Ghent and moved on to London. Two of them were sons of a prominent surgeon, Jean-Baptiste François Loeillet, who himself came from a musical family, and the third was their cousin (whose father was a professional violinist). Since almost all their works were published as by “J. Loeillet,” considerable confusion as to who did what has evolved, and when one adds that one of the works in this collection, the concerto for flute and oboe attributed to Jacques Loeillet, may actually be by Robert Woodcock (1690–1728), then the entire matter becomes most tortuous. Suffice it to say that Jean-Baptiste (without the François, 1680–1730) moved to London in 1705, changing his name to John, while his brother Jacques (1685–1748), retained his birth name as oboist to the Elector of Bavaria and the King of France, though he was known as Jacob. Their cousin, also named Jean-Baptiste (1688–1720), worked in France as well (in Lyon), but added to his name “de Gant,” presumably to distinguish himself from the London Loeillet. If anyone comes away from this identification mess with some clarity, they are doing much better than I am. At least the additional fillip by director Jan Devlieger of his own “reflections” offers no such controversy as to who wrote it, though I daresay that if it were put on a drop-the-needle test, the stately dance based upon Loeillet tunes for string quartet would fit in quite well with the rest of the music on the disc. This being said, I for one have difficulties when a modern composer who is not reconstructing a work with missing parts (as I myself have done) inserts his own music, whether stylistically compatible or not, onto a disc devoted to the works of others long departed. Whether or not this modern interloper is well done (and this one is), it has always seemed a bit suspect, and this disc could easily have done without such an encore.    In any case, the music on this disc is delightful, although that term may elicit caution when one finds that the sonatas and suite are all in minor keys, lending a touch of drama to the disc. The Jacques Loeillet sonata for two flutes and two recorders is very much in the vein of Henry Purcell, with a roving bass that outlines a ground in the two fast movements, but Loeillet plays off the two very different timbres of the flutes and recorders in a careful manner that exploits the sonorities. This almost calls for echo effects, and to be sure there are some, but especially in the first movement and the sustained mezzo di voce lines of the second, the sonorities blend and diffuse, making this a well-designed work. A good passacaglia seems to wind it off. It is quite different from its companion in A Minor by Jean Baptiste Loeillet, a four-movement suite for two recorders that almost begs to have someone provide a basso continuo. It is very Corellian, with almost all of the four movements in imitation, save for the rather flowing gigue at the end. The recorder and oboe sonata by John Loeillet, on the other hand, wavers between Handel and Purcell in style, with nice Handelian imitation between the two instruments in the opening Adagio, and a sort of perpetual-motion running bass tying everything together in the Allegro that follows. The harpsichord suite is extremely French in style, indistinguishable from François Couperin in the cautions and detailed ornamentation that seems to permeate the succession of dance movements. I particularly like the thickly textured final gigue. As for the two concertos, they are worlds apart from the Jacques Loeillet sonata, the first being a very Vivaldian three-movement work for flute, and the second almost a dead ringer for Telemann for oboe. These are clear imitations to my ear, and provide none of the cautious textural work of the sonata. The sustained lyrical oboe line of the third movement, which soars above steadily marching string chords, is a nice bit that certainly has imitations of Telemann, while the second movement is a rather stiff fugue between the oboe and first violin. I say, if Robert Woodcock wants to claim these, then all the more power to him, for they just don’t measure up to the Loeillet sonata in quality, though they are nice pieces in and of themselves. Not much needs to be said about the dance tunes, save that they are the sort of everyday party music made for dancing and a world apart from the more stylized sonatas and concertos. There is nice rollicking rigaudon that is a hornpipe in disguise, and one can’t fault the lively “Canarie,” a reworked gigue.    The early-music group Les Goûts-Authentiques may be sort of playing to the Ghent historical leanings of its leader, but the sound is excellent all around. The playing is lively and finely nuanced, the intonation and balance perfect, and they certainly make the music come alive, even the tombeau composed by Devlieger. I do not know if this will herald any further exploration of the Loeillet family’s music, but it is enough to make me want more. A wonderful disc and highly recommended.
[/show_more]